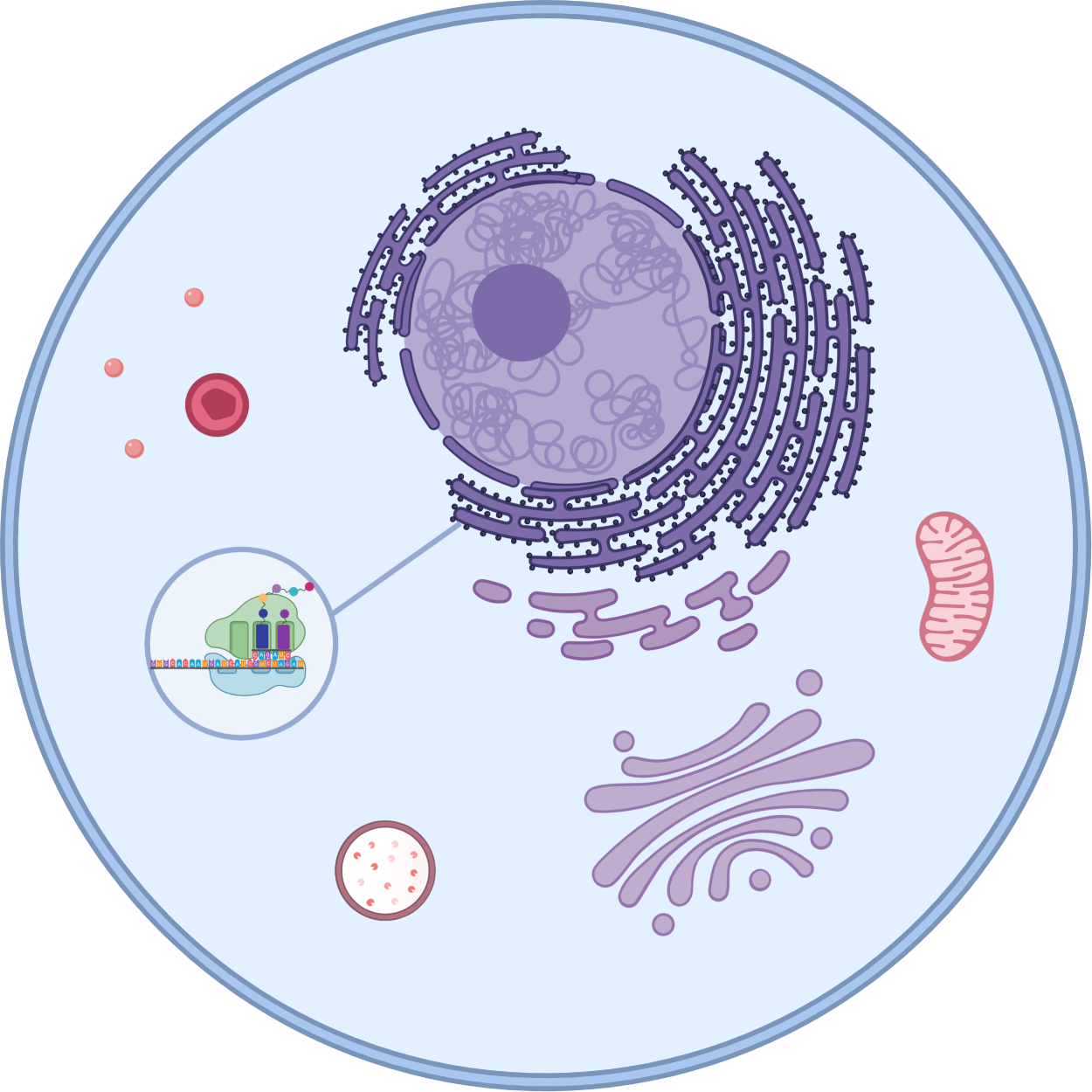 The membrane surrounding the cell is a protective barrier, but also so much more. It consists of a double layer of fats and phosphates (a phospholipid layer), which contains signaling and transport molecules that carefully control what gets in and out of the cell, help the cell stay aware of its environment, and facilitate communication between cells. Similar phospholipid structures surround many other parts of the cell, including the nucleus. Having a nucleus enclosed by a membrane is one of the defining features of eurkaryotes (plants, animals, fungi, and protists) that separate us from bacteria.

The cytoplasm contains all the contents of the cell except for the nucleus. In between the cell parts is a gel-like substance called cytosol that fills the space of the cell. Also running through the cell is the cellular skeleton, a series of fibers and filaments that help the cell maintain its shape and structure.

Mitochondria (singular: mitochondrion) are the primary sites of energy transformation, where glucose from our food is transformed into ATP, the energy currency of our cells. Billions of years ago, mitochondria were free-living bacteria that got absorbed into other cells in a symbiotic relationship. As a relic of their independent past, mitochondria have their own DNA and are responsible for reproducing themselves. A consequence of the chemical reactions involved in being the “powerhouse of the cell” is the production of free radicals, which are unstable and can cause damage other molecules in cells, including DNA. This damage is thought to be one of the causes of aging.

The Golgi apparatus modifies and transports protein and lipid (fat) molecules within and outside the cell. It is often referred to as the “post office of the cell” because when a protein needs to be taken out of the cell, the Golgi packages it and tags it for export. Cells that secrete more proteins usually have more Golgi, and diseases associated with dysfunctional Golgi are commonly related to systems dependent on secreted proteins, such as the skin and skeletal system. There is also some indication that fragmented Golgi play a role in neurodegenerative disorders, such as Alzheimer’s disease and Parkinson’s disease.

Lysosomes are responsible for breaking down molecules, including conducting autophagy (self-eating), a recycling process that is vital for maintaining cellular health. During autophagy, damaged or unneeded molecules are digested then restored to their original state so they can be used again. Autophagy has emerged as a focus of aging research, as we learn more about the problems caused by damaged molecules that accumulate with age.

Peroxisomes are small organelles enclosed by membranes that contain dozens of enzymes that play a role in metabolism, particularly in breaking down fatty acids through oxidation, which lets us extract energy from fats. A byproduct of that process is hydrogen peroxide, which can damage other molecules and contribute to aging. In healthy peroxisomes, hydrogen peroxide is quickly neutralized. Dysfunctional peroxisomes may allow the accumulation of hydrogen peroxide and have been implicated in more rapid aging.

Ribosomes are the manufacturing center of the cell, where all the proteins needed for cellular function are produced. These molecular machines bind messenger RNA and transfer RNA together to synthesize polypeptides and proteins (more on that in the next section).

The nucleus acts as the feudal lord of the cell, directing all the cell’s activities. It is where a cell’s DNA is contained, and it also controls the manufacture of new ribosomes, which are exported out of the nucleus through nuclear pores. Maintaining nuclear integrity is critical for cell health. Two of the most common progeroid (rapid aging) diseases involve genetic mutations leading to defects in the structure of the nucleus.