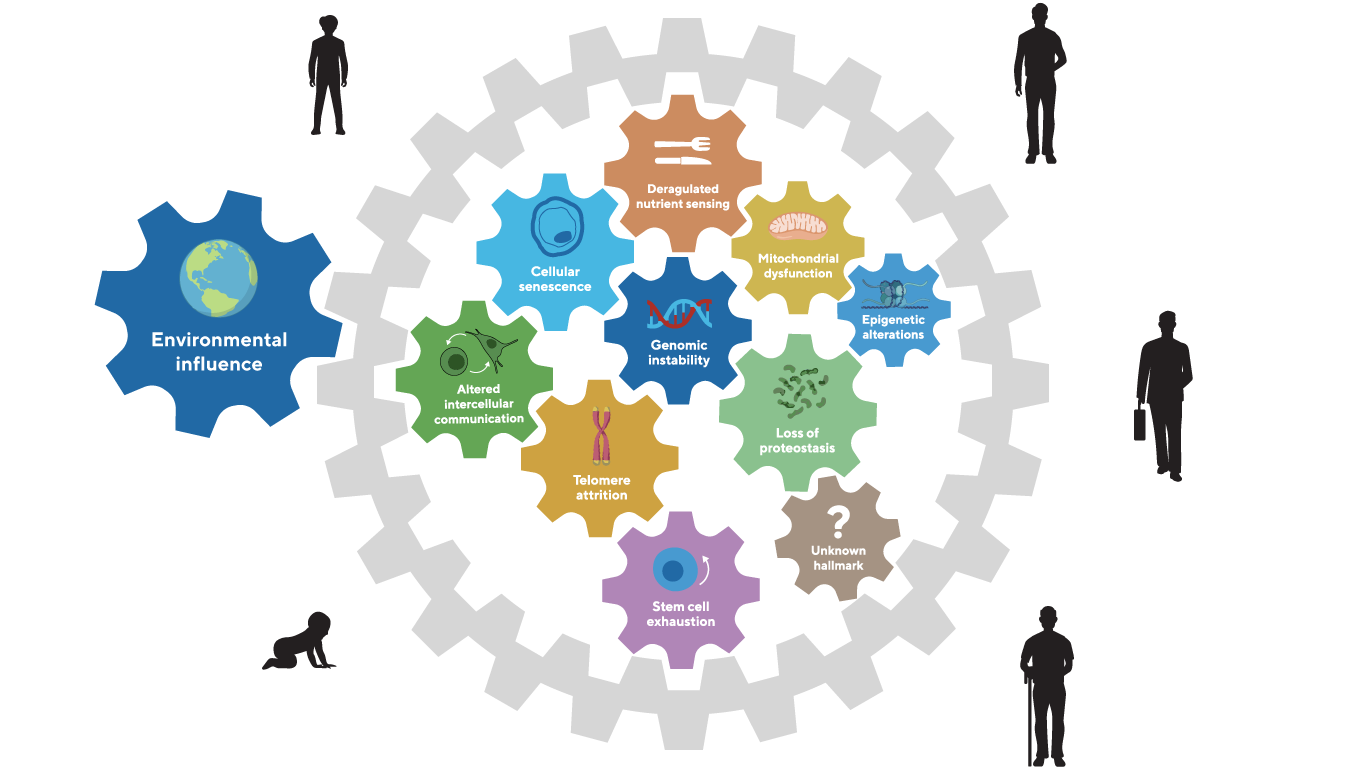 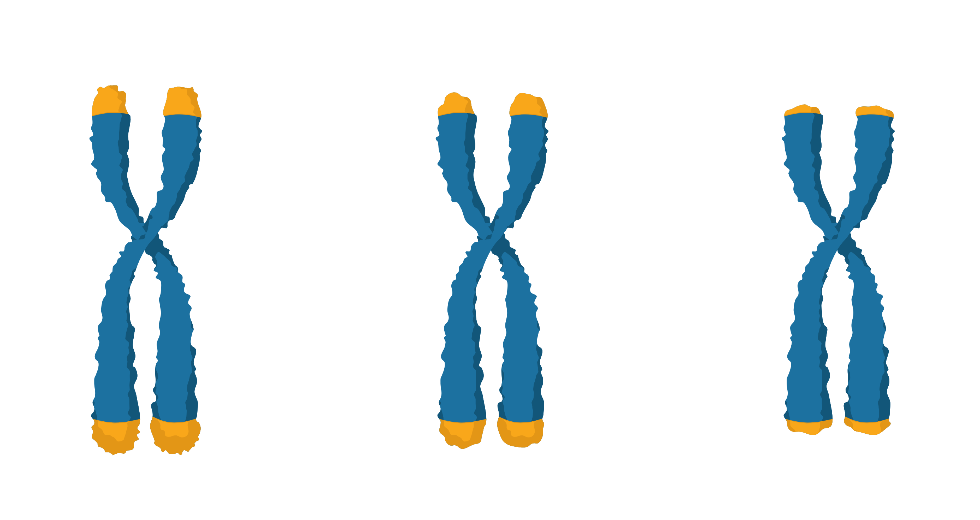 Telomeres are one of the most widely known biological factors associated with aging. These specific DNA sequences at the ends of the DNA protect the rest of our DNA from getting damaged when it is replicated for cell division. Telomeres shorten every time a cell divides, and so they generally shorten with age. Short telomeres are associated with many age-related diseases such as cardiovascular disease, as well as an overall increased risk of mortality.

When telomeres get critically short, a cell’s genome becomes unstable because the telomeres are unable to protect it anymore. At this point, one of several pathways can get activated to either kill the cell or turn it senescent.

While the relationship between aging and telomeres is not yet fully understood, there is a clear correlation: behaviors that tend to accelerate aging, such as smoking, shorten telomeres, while healthier activities, such as exercise, seem to help lengthen telomeres. 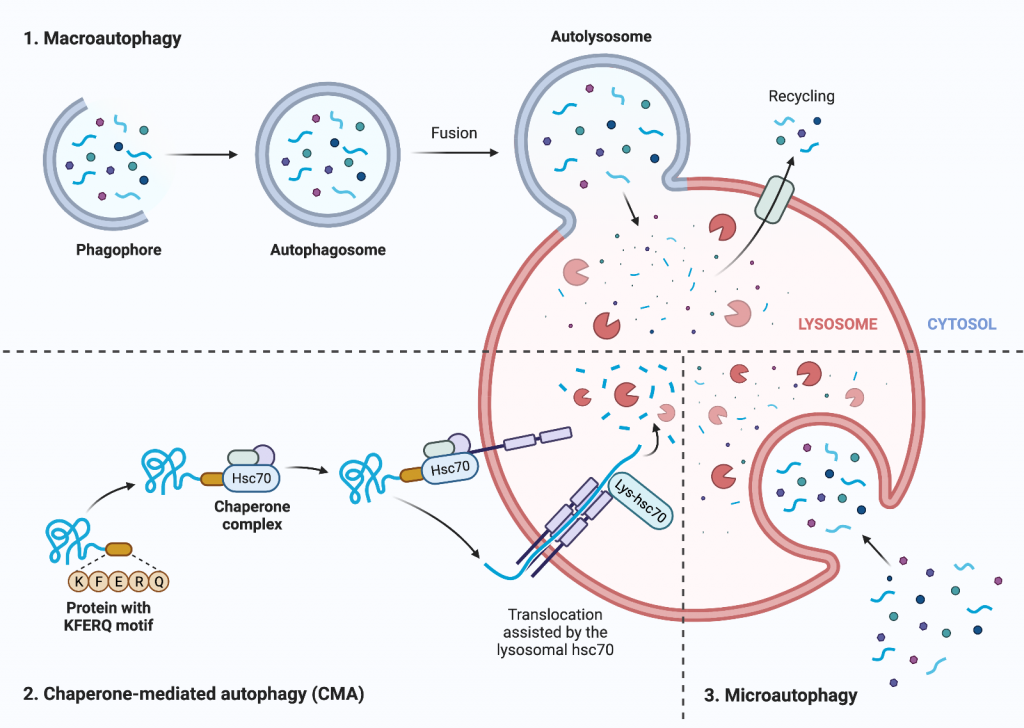 As cellular machines, proteins have very important jobs, and they must be in good shape to get their jobs done. The work a cell puts into maintaining the right proteins in the right configurations is called proteostasis. In healthy cells, damaged proteins are either reshaped by so-called chaperone proteins or tagged for recycling in the lysosome in a process called autophagy, one of the most studied fields within aging. The loss of proteostasis with age means that the protein-building machinery of the cell begins to fail, and misfolded proteins begin to accumulate because chaperone proteins decline, and autophagy is not as efficient. The resulting buildup of misfolded proteins can become toxic to the cell. This protein accumulation includes plaques of beta-amyloid and tangles of tau, the two molecular hallmarks of Alzheimer’s disease. There is ample lab evidence that interventions to improve protein turnover with age can have beneficial effects on both health and longevity. 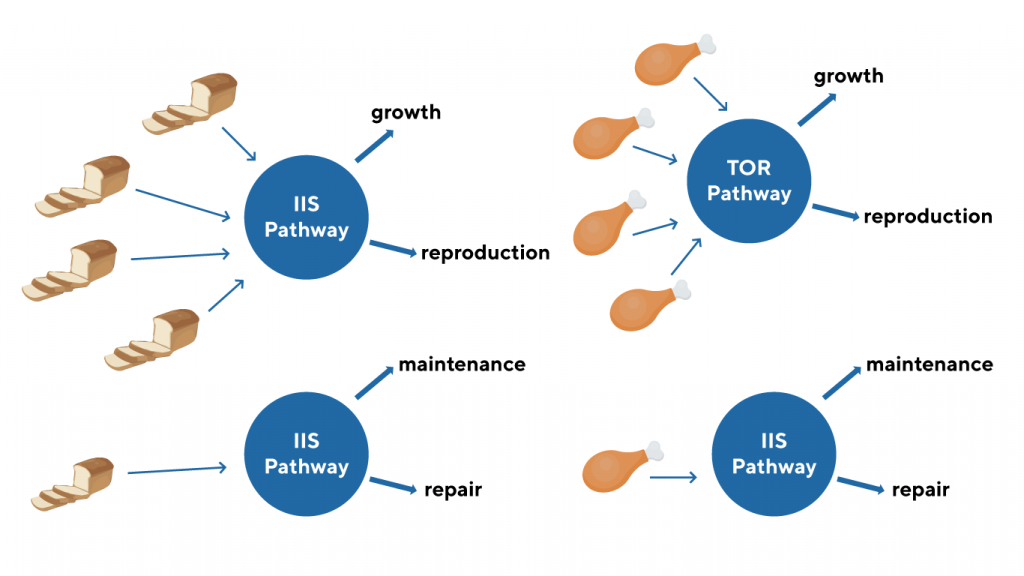 Nutrient sensing is a core biological activity. Our bodies constantly change their activity in response to the signals they get about the quantity and type of nutrients are available. Molecular “sensors” in the body are attuned to nutrients we consume. When they detect these nutrients (primarily pieces of proteins and the simple carbohydrate glucose), the sensors activate systems to utilize the nutrients to carry out the basic functions of life, such as growing and reproduction. The two best-characterized nutrient-sensing pathways are the TOR pathway and the insulin/insulin-like growth factor signaling (shortened to IIS) pathway. TOR integrates signals from throughout the surrounding tissue to sense whether nutrient conditions are favorable for growth. In general, more nutrients (particularly proteins) lead to increased TOR activity, and more growth. The IIS pathway is attuned to glucose and mediates cellular activity based on glucose availability.

Nutrient sensing operates throughout our lives, and like many other functions, deteriorates with age. For example, insulin sensitivity tends to decline over time. This means our cells don’t respond to circulating insulin as well, and thus don’t take up circulating glucose from the blood as efficiently. This can lead to both increasing blood sugar and increasing circulating insulin, which contributes to tissue damage and type 2 diabetes. TOR tends to ramp up with age, leading to excessive cell growth. 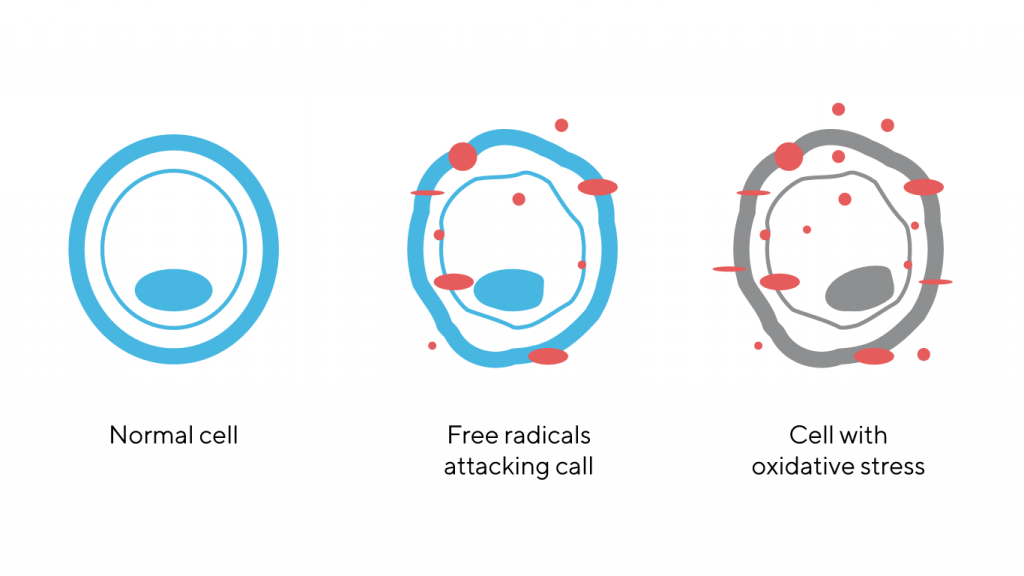 Mitochondria are incredibly dynamic. Remember that they have their own DNA, and so encode their own set of mitochondrial proteins. Through a complex quality control system, these proteins are constantly being created and broken down.

Over time, accumulation of mutations in mitochondrial DNA, damage to mitochondrial proteins, and decreased quality control lead to declining mitochondrial function. Mitochondrial decline has two major effects: (1) less efficient energy conversion and (2) increased production of free radicals, also known as reactive oxygen species, which can damage molecules in cells and even kill them. A body that can’t get the energy it needs will not function at its peak performance and instead make sacrifices in overall health simply to keep the body alive.

The way DNA gets used changes with age. Epigenetic modifications are modifications to the DNA molecule and connected molecules that don’t involve changing the code itself. If DNA is the cookbook, epigenetics helps determine which recipes get selected to make sure you prepare dinner each evening rather than breakfast. There is more epigenetic “noise” as we get older. Cells don’t coordinate which genes are turned on and off as well. It’s like the pages of the cookbook start sticking together, or get so splattered they’re unreadable; we can end up with a four-course dinner consisting of four different soups.

An example of a common epigenetic change that can affect our health is a gene encoding for a protein that increases Alzheimer’s disease risk becomes more active with age. Another example is that tumor suppressor genes become less active with age, which can contribute to cancer.

Stem cells are often described as immortal, or having unlimited reproductive capability, but this is not entirely true. The same processes that damage the rest of our body cells can happen in stem cells; DNA mutations can accumulate and telomeres can shorten, leading to depleted reserves of stem cells. Stem cell exhaustion is more of a consequence of age-associated molecular damage, rather than a primary cause of aging; in fact, many of the most visible signs of aging, such as less elastic skin or gray hair, result from stem cell exhaustion. Over time, these important reserve pools that usually support the rest of our tissues become too depleted to effectively replace cells, leading to damage and declining function in body tissues.

Remember that we have two sets of DNA, the one in the nucleus and the much smaller one in the mitochondria. Over the trillions of times that they replicate during a lifetime, both sets are subject to errors, though at an extremely low rate. As these errors, or mutations, accumulate, they can start wreaking cellular havoc. When a cell recognizes this instability, it can pull the brakes by triggering pathways that lead to either cell death or senescence. In general, both of these pathways protect the cell because they prevent damaged cells from trying to function. However, too much senescence or cell death causes other problems for an organism. When too many cells die, the stem cell pool can get overtaxed, leading to tissue damage. Senescent cells can spew out inflammatory signals that are known to be damaging. With age, we see both increased cell death and increased senescence.

However, cells with damaged DNA that are allowed to proliferate cause other problems. Cancer-causing genes (oncogenes) are more likely to activate with age. These genes can evade the cell’s quality-control mechanisms and end up dividing out of control, leading to cancer.

Finding ways to prevent mutations from accumulating would be a way to enable cells to maintain their health over time.

Cells that are stressed, either by unstable genomes or other forms of damage, activate pathways that pull the cell out of its typical cell division cycle. Instead the cell secretes a suite of proteins called the Senescence Associated Secretory Phenotype (SASP), many of which are inflammatory. (This was a breakthrough discovery made in the Buck’s Campisi lab).  Cellular senescence is an important protective mechanism to prevent damaged cells from dividing and becoming cancerous. Instead of letting a damaged cell potentially pass on its mutated DNA, the immune system gets called in to clear away damage and the surrounding tissue is activated to replace the cells. With age, though, this process starts to run amok. Senescent cells build up in our tissues without being cleared away. Although not dividing, the cells continue to churn out inflammatory molecules. They are a major source of the chronic inflammation that has been dubbed “inflammaging” because of its association with aging. Interventions that reduce the number of senescent cells in older mice lead to mice with longer, healthier lives. Cellular senescence has emerged from an obscure corner of cancer research to become one of the major focus areas of aging research at the Buck and in many labs around the world.

Altered intercellular communication involves interactions between cells, even between our own cells and the bacterial cells living in our gut! Examples of processes that happen between cells going awry with age are changes in hormones and signaling between neurons, as well as changes in the gut microbiome. Some scientists have even proposed “aging clocks” based on profiles of the bacteria in the gut. These changes happen at a larger scale and can thus offer a more comprehensive view of the aging process than the other hallmarks of aging.

The environment—everything that an organism encounters outside its own body—plays a huge role in how cells age. Our cells are constantly exposed to influences from the outside, spanning from the particulate matter in the air, to the food we eat, and even to the level of education someone attains. (Scientists have dubbed this influence the “exposome”.) It’s all integrated into the pathways activated by our cells, whether to their benefit or detriment. For example, stress has been associated with shortened telomeres and living close to a freeway is associated with neurodegeneration, but exercise is associated with cellular renewal and good sleep is associated with improved mitochondrial function. Emerging evidence suggests that our environmental exposures play a much larger role in aging than genetics, giving everyone an opportunity to improve their own aging process at the molecular level by controlling harmful exposures and optimizing ones that promote health.

The field of aging is relatively young, and still developing. As scientists dig deeper into the hallmarks and their connections, almost certainly more factors will be identified.